Barb in our store operations department got a phone call from Neighbor Elaine the other day, who told Barb how pleased she was to be a loyal patron of our Pet Supplies Plus store in Battle Creek, Michigan.  She hadn't been a loyal customer until a day or so before that, but team member Aren went the extra mile to win her business.  Barb told us:

I spoke with our neighbor Elaine about Aren today, and she told me a great story. Last week the power was out in part of Battle Creek. Elaine is a new fish owner and when there was no power she was worried that the fish would die without the air pump. Elaine called Petsmart  and got no help, she called Petco and got no help and she called PSP and got all the help she needed!

Aren told Elaine there were battery operated pumps and her store was out of them. She didn't stop there, though!  Aren called our Kalamazoo PSP to see if they had them in stock.  The Kalamazoo store had them.  But how to get one to Battle Creek for Elaine?

This is where Aren went the extra mile.  Because she lived in Kalamazoo, she told Elaine that it would be no problem to go pick up the pump and bring it back to the Battle Creek store the next morning.  Elaine said “You would do that for me?” and Aren said “Yes, that’s part of my job!”

After that, Aren showed her how to test the water for her fish and gave her a lot of additional fish information. Elaine no longer shops at the competition and couldn't be more thrilled with her new neighbors at Pet Supplies Plus Battle Creek!
Posted by Pawsitive Impressions No comments:

Erica and Wanda of the Livonia, Michigan team, went above and beyond to make a great impression on our neighbor Val.  The two had a couple of opportunities to provide great neighborly service, and they took advantage of them!


My son and I visited the location on 7 Mile and Middlebelt in Livonia, Michigan, about two weeks ago. A young lady name Erica was so awesome and knowledgeable I needed to tell someone. She exceeded my expectation. She never made us feel like an interruption. We asked her a ton of questions. My dog has been very ill and her level of expertise and concern really represented your brand very well. When I got ready to checked out I met Wanda, she signed me up for the in-store card. My son and I left a package at the store we thought it would be a hassle to get it back and started not to return for it, but Wanda not only remembered us but she put the package away for us. It's a pleasure to know that in a world where people has forgotten how to take time to make a difference, your organization has two that remember. I will always return to this location.

Posted by Pawsitive Impressions No comments:

Neighbor Jana dropped us a line to express her gratitude for the team in Greenwood, Indiana.   Melanie and the Greenwood team know that losing a pet can be very traumatic, and they made a very heartwarming gesture to console a neighbor in their time of need.  Jana writes:


I feel that most times people only contact to complain about things and good deeds go unnoticed or acknowledged. I wanted to write to you and say how impressed I am with the quality and human care and concern your employees have. I shop on a fairly regular basis at the store in Greenwood, IN and the employees are always VERY helpful and VERY pleasant, from greeting you upon entrance, asking if I am finding everything while I am shopping and always offering to assist me in getting my heavy items to the car. But I wanted to acknowledge one heartfelt trip. I entered the store one afternoon to purchase food for our cats, just recently having to have one put down, it was an emotional trip. I was looking at different foods for our cats since the one we lost had a special diet that we did not need to maintain. I was approached, as usual by a very helpful employee, Melanie, who began to assist me as I began to cry. She was more than helpful that day and very understanding. I made my purchase that day and left the store. A few days later, as I got our mail, we received a sympathy card from the staff at the store for our recent loss and was completely blown away at the compassion and care for someone, a total stranger to go out of their way to express their sympathy. Such a simple gesture but just goes to show how great people truly can be! My husband and I were very impressed and so appreciative of the thought. As I stated in the beginning, I just wanted to acknowledge a truly positive experience and share this with you to let you know how appreciative we were and to pass along a good deed done! Thank you for having excellent employees!
Posted by Pawsitive Impressions No comments:

KNOWLEDGEABLE, NEIGHBORLY, PET-CENTRIC and TRUSTWORTHY Warren, Michigan Team Outfit a Biker Dog with All The Goods He Needs

Warren, Michigan team leader Lindsay wrote to us the other day about Neighbor Diane. Diane wants everyone to know how snazzy her little dog Joe looks in his brand new carrier. Lindsay and the team at the Warren, Michigan pet center did a fantastic job finding just the right item for Joe, keeping him safe during his bike ride, which makes Diane very happy.  Lindsay told us: 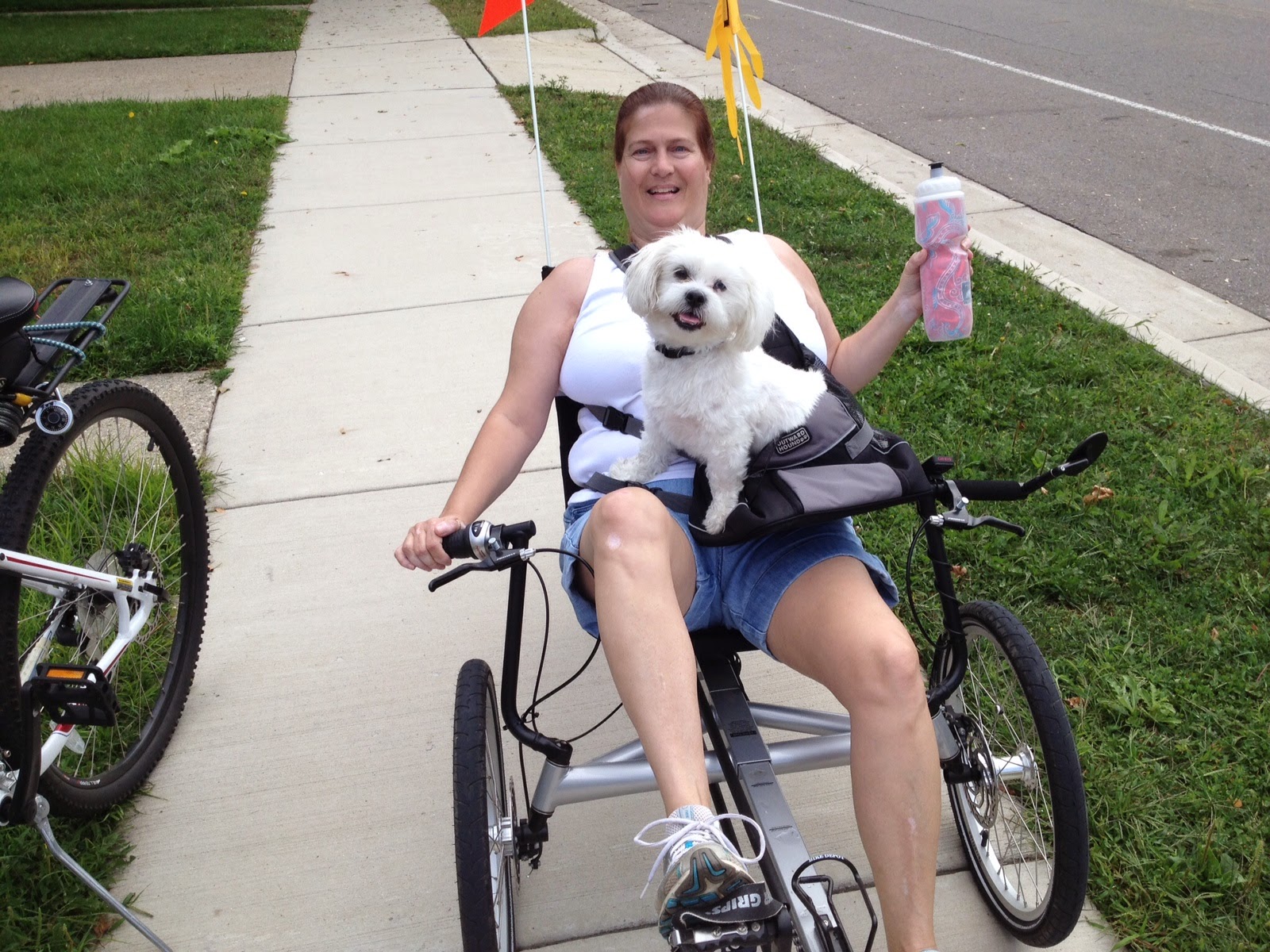 One of our regular neighbors, Diane, came in today and said I could share this story about her and her little dog, Joe. Diane has had back issues her entire life and due to being a postal worker it spread and now she experiences severe sciatica problems, too. She wants to remain active and started riding a special bike that helps her with her back pain. Well, Joe wanted to ride with her too! So, she decided to come in and see if we could find something for Joe to sit in so she could take him along. We helped her pick out the perfect carrier.  Now they are so happy! They love riding together. She said we are her favorite pet store. And Joe’s, too!
Posted by Pawsitive Impressions No comments:

Our neighbor service representative Barb had the pleasure of speaking with Mary about the service she experienced at our St. Clair Shores pet center on 13 Mile Road and Harper.  Barb told us that Mary had a lot to say about her pup's grooming experience, and it was all good! 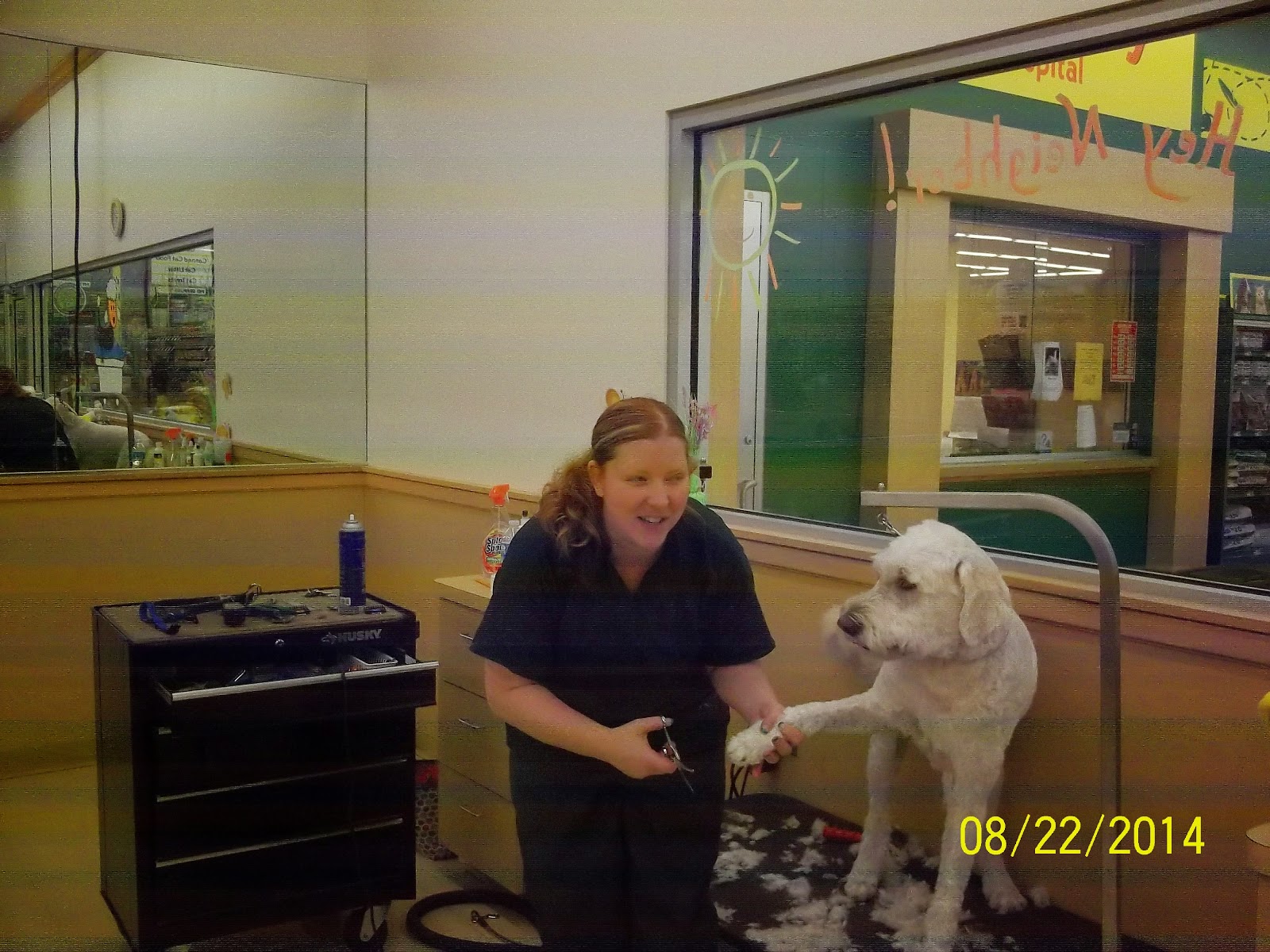 Mary told me that she thinks the St. Clair Shores store is wonderful. The managers are awesome, accommodating, and go overboard to remedy a situation to make sure things are perfect. There are always smiles on everyone’s faces. She also wants everyone to know that Kristi, her groomer, is beyond awesome with her dog, Brady. Brady had problems with groomers in the past and was afraid to get groomed. This caused Mary some anxiety, too! Mary called the store and spoke to the manager about this and was told that he guaranteed that Brady would like Kristi--and he does! Mary said that when they go for grooming Brandy can’t wait to get in the grooming and runs right up to Kristi. This makes Mary feel so much better about having her dog groomed and plans to do all her pet shopping and grooming at that store!
Posted by Pawsitive Impressions No comments: