It is Mustache Monday in Mansfield, OH! 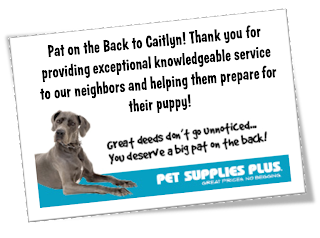 I just wanted to acknowledge one of you Associates at the Quincy store. Her name I believe is Caitlyn. She such an amazing employee. My Girlfriend and I went into your store to prepare for our first dog Rocky a Boston Terrier. We need everything for our puppy before he arrived. Caitlyn took about 45 minutes of her time to walk us around the store letting us know what we needed. She pointed out things and gave us different choices. She was a wealth of knowledge and so energetic. It's not often that you can find someone who loves there job but she absolutely does. You could tell that she enjoys helping people and that is a very great characteristic to have in the pet supply business. We are Pet supply customers for life because of Caitlyn. Please pass this on to her to let her know we really appreciate her help.

Thanks,
Neighbor Joe and Jen

Posted by Pawsitive Impressions No comments:

﻿﻿﻿﻿﻿﻿﻿
Thank you to Tim, Moe & the rest of the team in New Hartford, NY for quickly coordinating a last minute pet food drive to help the neighbors and their pets in Mohawk Valley.  A special Pat on the Back to team members, Lam and Samantha, who help coordinate events at this pet center.  This type of involvement in the neighborhood is what allows us to be a favorite among our neighbors.


Dear Tim:
4PetSake Food Pantry, Inc. would like to extend our sincere appreciation for your hospitality yesterday, allowing us to hold a pet food drive at your store.

﻿﻿Our pet food pantry was begun this year with the intention of assisting senior citizens, veterans and those experiencing difficulty in caring for their pets during these hard economic times.  Little did we know that our pantry would be called upon by the Salvation Army due to horrendous flooding in the .  Our communities were inundated with flood waters caused by heavy rains and overflowing streams and rivers.  People are experiencing horrible damage to their homes and businesses.  The Salvation Army has stepped in to help with food for people who, due to loss of power and refrigeration, are not able to provide meals for themselves and their families and recently came to us for pet food to help these families.  We have also opened our pantry to victims of the flood with pet food assistance.  This situation had dwindled our supplies and we are so grateful that you and your employees approved our request to hold a pet food drive.  You and your staff were both welcoming and went above and beyond to help make it the success it was with taking monetary donations at the register, preparing a basket of pet treats, toys and products to raffle off and assisting us with loading the donations after the event.  The entire event went so smoothly and we left with a huge amount of pet food and money which will replenish our pantry and help those in need.

We send our heartfelt thanks for your assistance with our “last minute” request and look forward to holding more events at your store in the future.
Sincerely,
Kristine Wilson- President
Posted by Pawsitive Impressions No comments:

Lets hear it for the NEIGHBORLY team in Royal Oak, MI

From a loyal neighbor...

I visited the Royal Oak, MI Pet Supplies Plus on Friday, June 14 to pick up some litter for my rabbit.  The employees are always very friendly and helpful, but this time I was especially impressed and my 2 1/2 year old son was overjoyed.

He was standing at the pet clothing display cap playing with one of the mannequin dogs.  He does this every time we come in and some of the employees have noticed and we've had a laugh or two about his enthusiasm.  He didn't want to leave that spot but I finally got him to follow down another aisle.  We were admiring the aquarium trinkets when Liz came down the aisle holding Buster, the dog model.  She asked if he wanted to take him home because she saw how happy he was playing with it and that they were getting a new display which came with its own new dog.  Ryan, my son, was overjoyed especially when we left the store and he knew Buster would be his for good.  At the register Sarah said Liz had come into the office asking her if it would be ok to give away and she agreed.  I couldn't stop thanking both of them for the thoughtful and generous act of kindness to my son.  These days experiences like that are few and far between.

I really want to make sure Liz and Sarah are recognized for going above and beyond with their customers.  It's obvious they care and it shows!!  This is my local store close to my home and I'm so glad it's there and staffed with such friendly, professional and kind people.
Thank you!

A big PAT ON THE BACK to Jammie, Groomer in Okemos, MI Pet Supplies Plus, for saving a neighbor's pet.
This article was featured in the Lansing State Journal in March 2013:
When a Pomeranian named Scamp collapsed on the grooming table, his groomer Jammie,  reacted quickly putting her 25 years of life-saving experience as a medical assistant and EMT to good use.

Scamp was brought in by his owner Diane to be groomed at the Okemos Pet Supplies Plus on February 18th.  Groomer Jammie had just finished bathing Scamp and had placed him on the grooming table when he spun around and collapsed. His tongue was hanging out of his mouth and turning blue and his eyes had rolled back into his head.

Jammie quickly took Scamp out of his harness and began chest compressions on the 9-year-old Pomeranian. While she performed CPR she alerted another groomer and told them to contact Scamp’s vet and call the owner.
For Jammie it was just second nature. “I wasn’t scared or anything,” she said. “I knew what you had to do.” Jammie had received canine CPR training during her schooling to become a groomer but in addition administered CPR to humans countless times in her previous career as a medical assistant and EMT.

In less than two minutes Jammie had successfully revived Scamp. She then drove him to his veterinarian where she met up with Hallisy. An examination from the vet led to the discovery that Scamp suffered from congestive heart failure and an enlarged heart.

Scamp is now on medication to help with his condition and the day after his life threatening collapse he was back to hanging out with his family’s two cats.
Posted by Pawsitive Impressions 1 comment: